NEW YORK – Two Jewish students at a public college in New York have filed a formal federal lawsuit alleging that they were expelled from a student sexual assault support group because of their identity and that they were victims of harassment and anti-Semitic threats.

The lawsuit announced Wednesday against the State University of New York at New Paltz alleges that the university administration knew about the discrimination but allowed the anti-Semitic environment to fester.

Discrimination and alleged school neglect made the two students, both sexual assault survivors, feel unsafe on campus and made Jewish and Israeli survivors feel rejected, the complaint says. .

The complaint filed with the U.S. Department of Education’s Office of Civil Rights alleges that the university violated Title VI of the Civil Rights Act of 1964.

The law prohibits discrimination based on race, color, or national origin in programs that receive federal funding. Anti-Semitic discrimination was included as a Title VI violation in 2019 with an executive order from former US President Donald Trump. The complaint states that Zionism and a connection to Israel are integral to the faith and identity of many Jewish students, so harassment and demonization of Zionism constitutes discrimination.

The complaint asks the federal bureau to open an investigation into New Paltz University, a reputable New York public college in upstate New York that has about 7,500 students. The Department of Education’s Civil Rights Office only investigates complaints that it deems worthy of a thorough investigation. It has opened several investigations in response to similar complaints.

Jewish and Israeli students on campus “were vilified, marginalized, harassed and excluded” from the campus support group, called New Paltz Accountability, according to the complaint.

“The exclusion of Jewish and Israeli students from [New Paltz Accountability] based on their ethnic and national origin identities has left sexual assault survivors with no place” to receive services on campus, he said.

The lawsuit was filed on behalf of the two students and the advocacy group Jewish On Campus by the Louis D. Brandeis Center for Human Rights Under Law, a nonprofit civil rights advocacy group that focuses on Jewish issues and related to Israel. The center has filed several other similar complaints against American universities, including Brooklyn College, which is part of New York’s public university system.

Illustrative: Anti-Israel and pro-Palestinian activists in New York, May 15, 2021. (Luke Tress/Times of Israel)

The New Paltz incident began in December 2021, when one of the students, Cassandra Blotner, posted on social media that Jews were “an ethnic group that comes from Israel.”

“Israel is not a ‘colonial’ state and Israelis are not ‘settlers’. You cannot colonize the land where your ancestors came from,” she said.

The sexual assault awareness group, New Paltz Accountability, which Blotner co-founded, denounced the post and lashed out at Blotner. Four other leaders of the group texted Blotner, saying, “We think we should tackle this problem… Israel is a colonial state.

They said the message asserted that “none of us feel comfortable” and “is about the organization as a whole”.

“As a group focused on fighting oppression, we simply cannot remain silent when it appears that a member may tolerate imperialism and colonialism,” they said.

Blotner initially refused to defend the position, saying she was singled out as the only Jewess in the group and that no other ethnic group was subject to such scrutiny of their beliefs. She then offered to meet the group with representatives of the campus Jewish Student Union. She said she viewed the potential reunion as an opportunity to educate others about “Jewish history, theology and culture.”

New Paltz Accountability refused and told him Zionists were not welcome in the group.

Fellow New Paltz Accountability member, Ofek Preis, who is Jewish and Israeli, shared the same Instagram post as Blotner in a show of support. The sexual assault awareness group cut her off and made it clear on social media that the group was closed to Zionists. She resigned from the group.

“I should not have been asked to choose between being Israeli or being a survivor,” Preis said in a statement. “The NPA is no longer a safe space for all survivors.”

New Paltz Accountability continued to issue statements making it clear that not all Zionists are welcome, claiming that Zionism is a form of racism and white supremacy, blaming the two students for the actions of the Israeli government and accusing the students Jews to support “violent and oppressive colonization and occupation”. of Palestine”.

The group’s leadership “publicly vilified” the students, posting a statement on social media denouncing their Zionist views. The group also posted private text message exchanges with Blotner and Preis about their removal.

“To fight against sexual violence, we must oppose all forms of oppression. This includes the ethnic cleansing of Palestinians,” the statement said. “Supporting a colonialist state goes against what we stand for.”

The online campaign has spurred harassment against Blotner, including messages threatening to spit on her and calling her a “dumb bitch”. The harassment also triggered anxieties stemming from the trauma of Jewish students as survivors of sexual assault, according to the complaint.

“Expressing support for the Jewish homeland is central to my Jewish identity,” Blotner said. “I shouldn’t have to shed that part of my Judaism to stand up for sexual assault survivors.”

“To then be called off and stalked and harassed, well, I can’t even put into words what an awful and scary experience it all turned into,” she said.

Blotner and Preis appealed to the university administration, saying they did not feel safe on campus. Blotner asked security to protect her on the way to class, but the university refused, advising her instead not to attend class. Campus police also said they could not investigate. Both students stopped attending classes due to anxiety and safety concerns. Title VI prohibits universities from allowing a “hostile environment” that interferes with a student’s ability to participate in services, activities, or opportunities at a school.

School president Donald Christian said New Paltz Accountability’s actions were discriminatory and anti-Semitic, but the university said it could not intervene because the group was not a recognized student organization. The complaint alleges that the university treats the group as a de facto recognized group and that it operates as one in providing services to students and using university resources.

The president’s statement said the administration was aware of the situation, but the school took no action to discipline the abusers, provide services to survivors of Zionist sexual assaults or allay complainants’ concerns about of security. The university still accepts the group excluding Zionist students, according to the complaint. 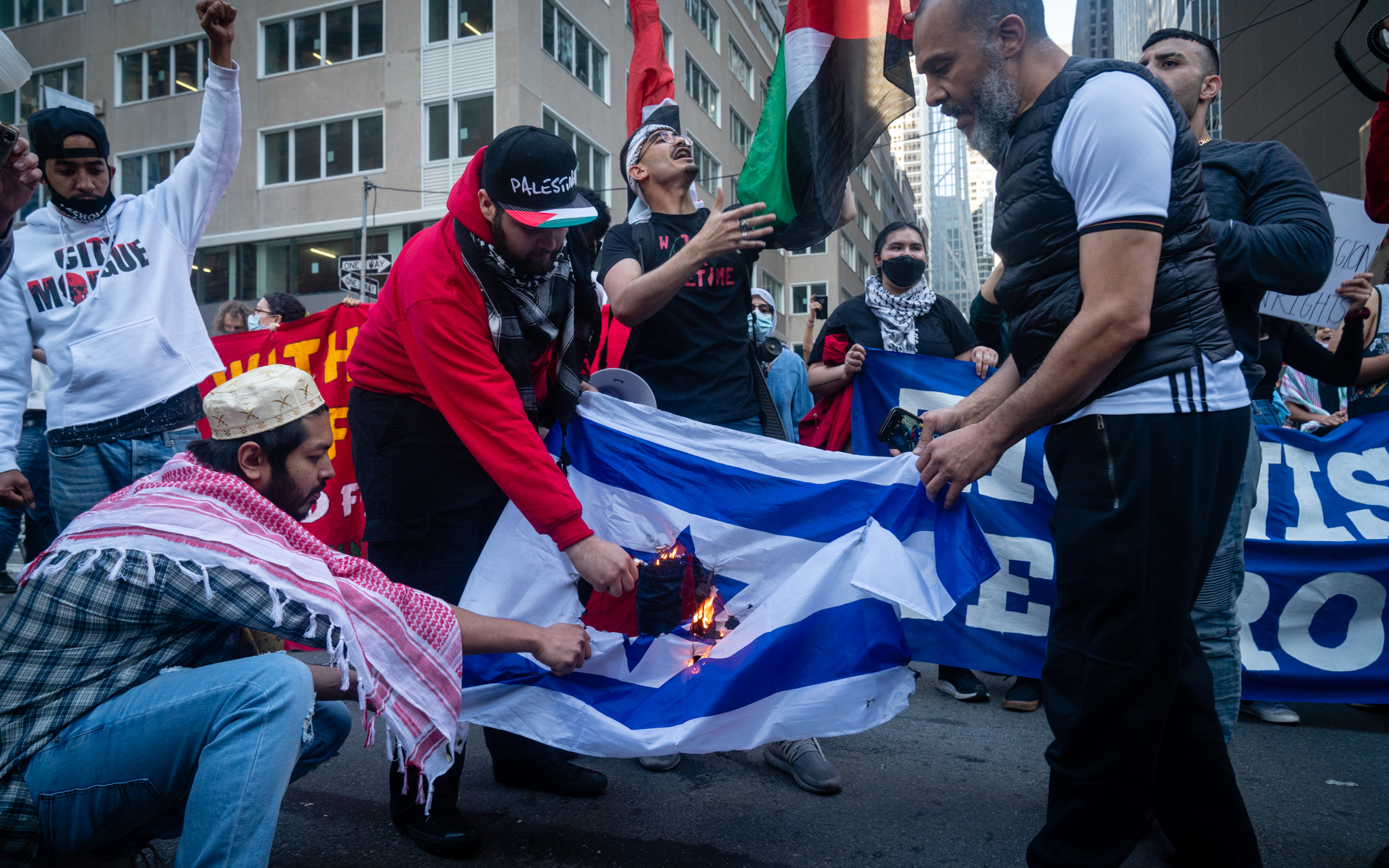 Anti-Israel and pro-Palestinian activists burn an Israeli flag in New York, May 15, 2021. (Luke Tress/Times of Israel)

New Paltz’s complaint marked the latest in a series of legal battles over anti-Semitism at American universities, as Jewish students recounted harassment from their peers and indifference from administrators on a number of campuses.

Trump’s inclusion of anti-Semitism in Title VI protections has opened a new front for Jewish advocacy groups. The Department of Education opened formal investigations into the University of Southern California and Brooklyn College last year, both in response to complaints from the Brandeis Center.

Brooklyn College is part of the City University of New York’s public college system, which has been embroiled in allegations of anti-Semitism by students and faculty and allegations of inaction by its administration.

Jewish students and professors have also filed lawsuits for alleged anti-Semitism in recent years against other universities, including Stanford University and New York University.